Untitled (or. what happens when I can't sum my thoughts up neatly)

For the month of January, I was in residency at Caldera. Jim Leisy was one of the four other artists there. My studio was in the grand hall – the biggest room in the central area of the campus - and Jim would usually stop by a couple of times a day to find out what I was working on, to tell me what he was working on, to ask if I wanted to go for a hike, or in to town. We talked about so many things – our families and our significant others, how trees think, infectious diseases, black vinegar and chinese taxicabs, amateur physics, music, photography, electronics, soldering, time, the solar system… Once I didn’t see him for a full day, and I checked in on him – he was working too hard and stressed on the deadline of our open studios. His 3D printer had broken and he was not happy.

I found out this morning that Jim passed away yesterday – suddenly and unexpectedly. I’ve wandered around today with the wind knocked out of me. I know full well from many of our conversations that he wasn’t done living – he had so many things he still had to do. I’m so sorry for his partner and his sons. My heart goes out to them.

I didn’t take very many photos at Caldera. It’s a gorgeous place that attracts a lot of photographers. I am not a particularly brilliant photographer (and my best camera is my iphone), and I let others – like Jim - document the place. I watched facebook fill up with photos of Jim today and wished that I had taken my own photo of Jim at some point.

The morning after Jim’s printer broke, I came in to my studio to a robot and a note. The note was on an index card and said only ‘2 AM!!!’ and the 3D printed robot stood on top of it. The robot has been sitting on my desk (first at Caldera, now back at home), staring at me since then. I went looking for the note this afternoon (and failed) and found a folder full of photos that he had taken and left on my studio desk the morning we’d left. There’s a picture of him in that stack, and I’m glad that the photo that I have of to remember him by was taken by a far more talented photographer than myself. 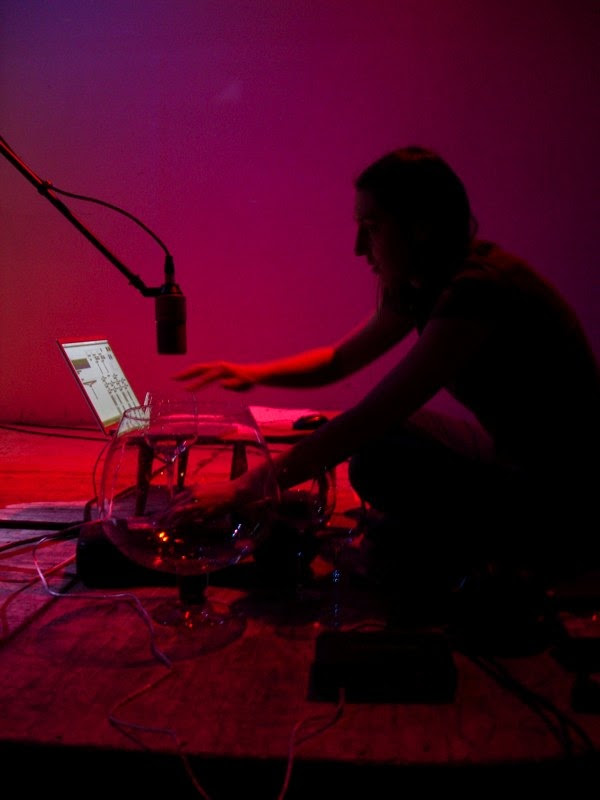 I played the piece Soup at the Holocene on April 10th as part of the electrogals concert. I started it about 4 years ago, and it's still in progress.

The sounds
I've traveled a lot, and I always carry recording equipment with me. I think I first got the idea for this piece at about.. oh, sunrise, one day 4 years ago in a Muslim neighborhood in Addis Ababa. Since 9/11, the US has spent so much time trying to convince its us that there's some major difference between Christianity and Islam, and I've always found them to be quite similar. I started to record the sounds of anything that people believed in - they're all really incredibly similar, yet we take the differences so seriously that most wars can be traced back to them.

The final piece that I played at the Holocene had the following sounds in it:

I didn't ask for permission to record in Paris or Marrakech - Those sounds I got from walking through the streets, not from entering into a place of worship. I did ask permission both in the Vanni and Dandesi - I suppose if either of those places had been tourist destinations they might have been a little more hesitant, but I'd lived next to the temple in the Vanni for few months before I'd asked permission, and the lama in Dande had brought it up first. I haven't always asked permission, but I felt like I should ask permission on the things I was going to share.

The ideas behind the piece:
I took a history of religion class about 10 years ago, and one of the things I recall from it was how my teacher summed up Hinduism. He said, "It doesn't matter what you believe, as long as you believe."

I think I view myself as fairly agnostic, although I suppose that that could be argued either way. I agree with Marx's "religion is the opiate of the masses" - Religion is a crutch, but perhaps the world needs crutches. Maybe that is the only way we really can function. I've had experiences that were perhaps religious experiences, but perhaps they can be explained with science - I'm fine with either answer. I think we should be moral and just because we should be, but if others need their god(s) to tell them so, then so be it. I personally need religion to deal with death - I personally can't watch someone suffer and die without hoping that they're in a better place.

I was in a bad accident a short while ago, which either makes you think about god, or at the very least, makes other people think about god for you. I spent a fair amount of time thinking about things like breathing and out-of-body experiences because my body was too painful to stay in.

I did go to church as a child - fairly mainstream churches that we were known to leave when the congregation thought god was trying to tell them how to vote or who to hate.

I didn't say anything about the piece before playing it - Going into my religious beliefs, or lack of - seemed more personal that I felt like sharing. I found it interesting that everyone who talked to me afterwards knew exactly what it was about.

Other things:
The title Soup came from a line in a Nick Cave Song - in the Mercy Seat, there's "the face of Jesus in my soup." Religion is soup. It's all the same, yet very different.

The cello player's name is Renee Vineyard - she and I were in orchestra in High School together. She's now a teacher at Binsmead Middle School.

And this is all very much dedicated to gene, my better half.

Posted by cdenton at 2:53 PM No comments:

On June 21, 2003, I participated in the yearly Chapel of the Chimes Concert, called Garden of Memory and put on by New Music Bay Area. Around 30 composers and performers spread themselves out through the Julia Morgan-designed columbarium and over 1000 visitors walked through to hear the many sounds throughout the building.

Kavita Bali took these pictures of my installation. I hung 8 speakers down from a balcony into a small garden and played 8 different channels of sound through them. The piece consisted on recordings of women working - ranging from baristas to musicians to gardeners to warehouse workers. The piece lasted approx 4 hours. 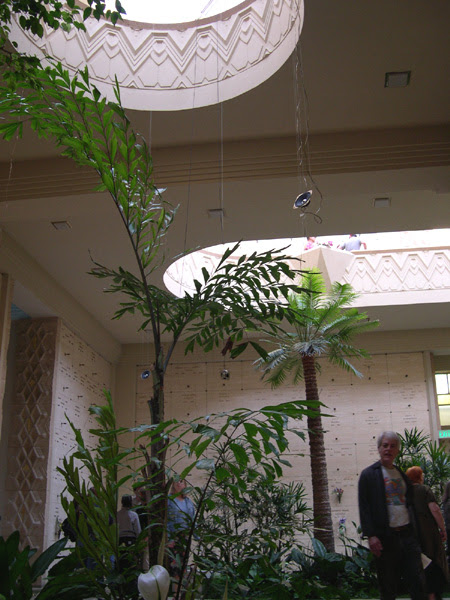 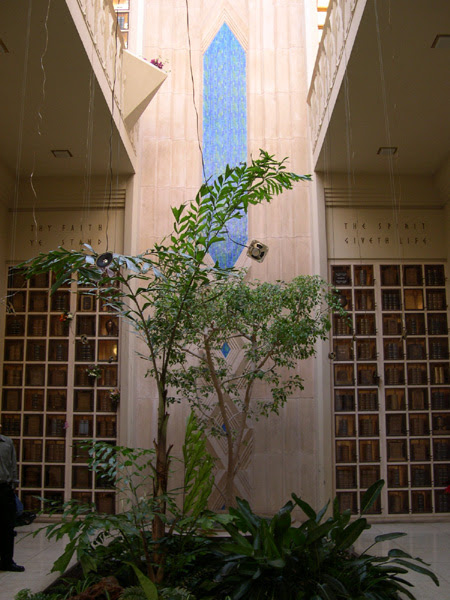 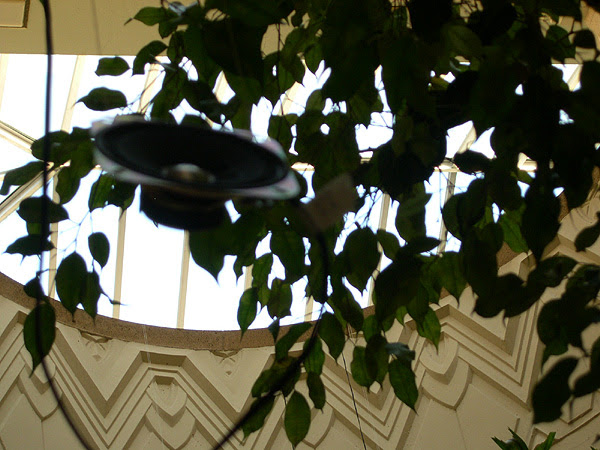 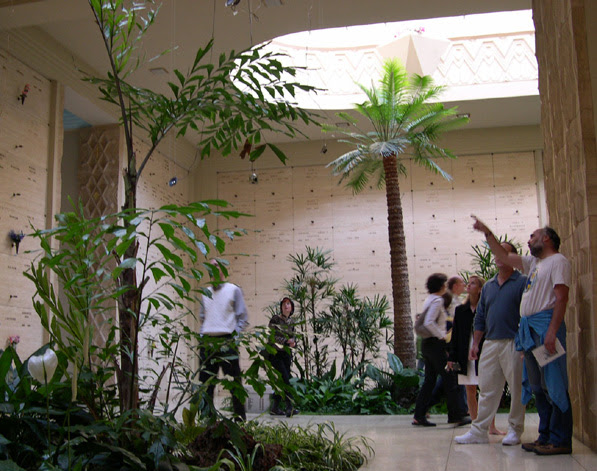 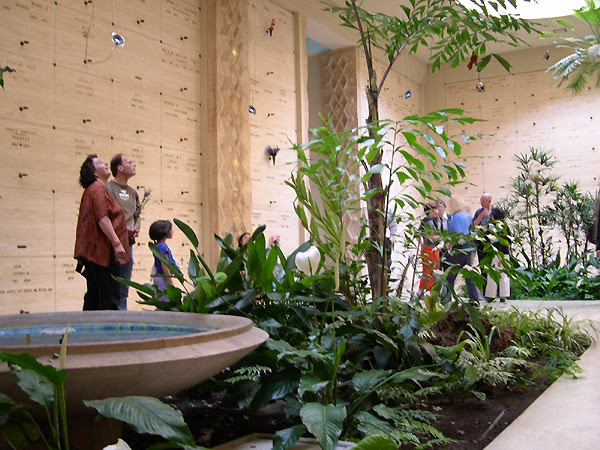 Posted by cdenton at 3:04 PM No comments: